After switching to an unfamiliar October slot in 2020 because of the coronavirus pandemic, the French Open returns to the late Parisian spring this year.

Little was familiar about the tournament last year – other than Rafael Nadal winning the men’s singles for a record-extending 13th time.

The Spaniard is the favourite to defend his crown once again when the tournament begins on Sunday, although Serbia’s world number one Novak Djokovic will expect to provide the toughest challenge at Roland Garros.

Polish teenager Iga Swiatek is bidding to become the first player to successfully defend a Grand Slam women’s title since Serena Williams at Wimbledon in 2016, but faces competition from Ashleigh Barty – the world number one and 2019 Roland Garros champion – who returns to the Paris clay following a 13-month hiatus during the pandemic.

Fans allowed in as France starts to ease restrictions

With France still under coronavirus restrictions, the tournament will again be played in front of a limited number of fans.

Last year 1,000 fans were allowed daily and this year’s tournament was pushed back a week to enable spectators to attend.

From 30 May to 8 June, there will be 5,388 spectators allowed on site each day, split across six different zones.

The country is lifting some restrictions on 9 June, meaning Court Philippe Chatrier and Court Suzanne Lenglen will be able to host 5,000 people for the quarter-finals, semi-finals and finals. The number of fans on the whole site will rise to 13,146.

Only visitors with a ‘health passport’ – proof of a recent negative test, a vaccine certificate or proof of antibodies – will be allowed to enter.

In a major break with tradition, night sessions are being introduced on Court Philippe Chatrier for the first time, leaving Wimbledon as the only Grand Slam without them.

But, with France’s curfew set to remain at 21:00 local time (20:00 BST) until 8 June, nine of the 10 scheduled night sessions will be closed to spectators.

When the country lifts restrictions on 9 June and pushes back the curfew to 23:00 local time (22:00 BST), up to 5,000 fans will be able to watch the first men’s quarter-final under the floodlights.

Will anyone stop the King of Clay?

The question we have been asking in each of the past 16 years is still the leading topic in the men’s singles.

Nadal has won a record 13 titles at Roland Garros and, even though he turns 35 during the tournament, he remains the favourite to lift the Coupe des Mousquetaires once again.

Djokovic, 34, is the player most likely to threaten Nadal’s dominance, no doubt with an added incentive of avenging defeats by the Spaniard in October’s showpiece at Roland Garros and the Italian Open final earlier this month.

However, Nadal is seeded third because it is based on the world rankings, meaning he could meet Djokovic in the semi-finals after they landed in the same half of the draw.

Russian world number two Daniil Medvedev is seeded above Nadal, despite the 25-year-old never having won a main-draw match at Roland Garros and openly discussing his dislike for the red dirt.

Austrian fourth seed Dominic Thiem finished runner-up to Nadal in 2018 and 2019, but suffered a “huge step back” in his preparations by losing to British number two Cameron Norrie in Lyon last week.

The 27-year-old took two months away from the tour earlier this year, saying he needed a “small reset” after the physical and emotional effects of winning his maiden Grand Slam title at the US Open in September took their toll.

Another player looking to unlock the grip of the ‘Big Three’ on the sport’s biggest titles, and earn his first Grand Slam, is Greek fifth seed Stefanos Tsitsipas.

The 22-year-old, who lost to Djokovic in an epic semi-final at Roland Garros in October, is the leading men’s player in 2021, having won more matches than any of his ATP rivals and claimed clay-court titles in Barcelona and Lyon.

While Swiatek had long been tipped for future success, her ascent to Grand Slam champion seven months ago was as surprising as it was swift.

Now she is ranked ninth in the world and, after winning the prestigious Italian Open earlier this month, returns to Roland Garros as one of the favourites.

“When you win a Grand Slam everybody will always remember that you won a Grand Slam,” Swiatek, who turns 20 on Sunday, told BBC Sport this week.

“I don’t think of it like I have to defend the trophy and win the French Open because what I did is always going to be with me.”

Barty, 25, won her first Grand Slam title at Roland Garros two years ago and remains the top seed after a successful return to action in 2021.

The Australian won her third WTA title of the year by beating Aryna Sabalenka on the Stuttgart clay, but was denied another when the Belarusian – now fourth in the world and also a leading contender in Paris – avenged that defeat a fortnight later in the Madrid final.

Barty has been hitting at Roland Garros this week with Japanese second seed Naomi Osaka, who has created a stir by saying she will not take questions from the media at Roland Garros.

Osaka, 23, has won all four of her Grand Slam titles on hard courts and is not comfortable on the clay, having won just one match on the surface since she last contested the French Open in May 2019.

Williams will once again be going for a record-equalling 24th Grand Slam title, the number won by Australian Margaret Court.

So far it has proved elusive for the 39-year-old American since returning from maternity leave three years ago and the Roland Garros dirt is the place she is least expected to win another major.

What about the British interest?

In what is an increasingly familiar occurrence, the tournament will be without Britain’s former world number one Andy Murray.

Murray, 34, decided to miss the clay-court Grand Slam to focus on overcoming a groin injury in time for the start of Wimbledon on 28 June.

After seeing his career derailed by a serious hip injury, the three-time Grand Slam champion has now missed 10 of the past 14 Grand Slams going back to Wimbledon in 2017.

At 20th in the world, Johanna Konta is the highest-ranked British singles player in Paris, although Dan Evans and Cameron Norrie come into the tournament in better form. 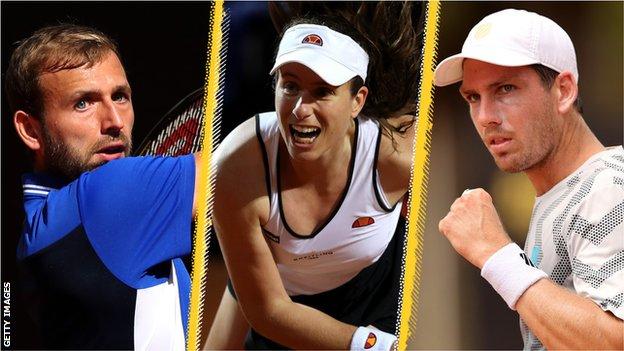 Konta, 30, has only won three of her nine matches since losing to American teenager Coco Gauff in last year’s first round at Roland Garros and has been continuing to manage a knee injury.

Evans, who is seeded 25th, surprisingly beat Djokovic on his way to reaching the Monte Carlo semi-finals last month, despite previously having won only four matches on clay in his career.

Now the 31-year-old is aiming for – as a minimum – his first main-draw win at Roland Garros.

Norrie has reached the third round at the past two Grand Slams and looks a decent bet to continue that form in Paris.

Only Tsitsipas and Andrey Rublev have claimed more ATP match wins than the 25-year-old this year. Norrie boasts a 14-4 win-loss record on the clay this year, having reached the finals at Estoril and Lyon.

World number seven Joe Salisbury leads British hopes in the men’s doubles, with the 29-year-old and his American partner Rajeev Ram aiming to improve on their quarter-final finishes in 2019 and 2020.

Jamie Murray has also never been beyond the last eight and lines up again with Brazil’s Bruno Soares, while Ken Skupski and Neal Skupski, Dom Inglot and Luke Bambridge, and Norrie and Jonny O’Mara are the other all-British partnerships.

In the men’s wheelchair event, Alfie Hewett is the defending champion but is likely to face strong competition from fellow Briton Gordon Reid. The pair will also team up as they aim to defend their doubles title.

Jordanne Whiley is set to compete in both the women’s wheelchair singles and doubles, while Andy Lapthorne competes in the quad events. 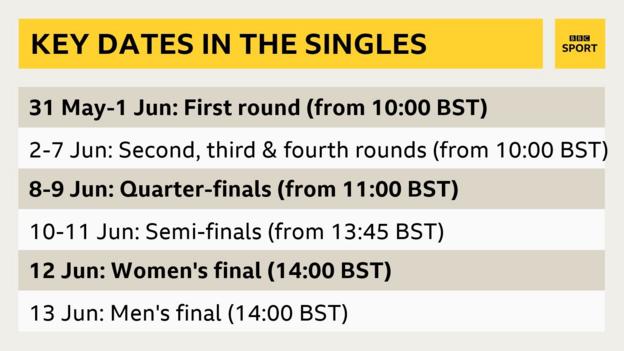 Greensill did not get special treatment, says Sunak

Anneliese Dodds on what chancellor should do in Budget