Paris St-Germain and Brazil centre-back Thiago Silva, 35, who is leaving the French club after the Champions League final, has been offered to Chelsea. (Telegraph)

Chelsea will complete the signing of Germany midfielder Kai Havertz, 21, on a five-year deal this week if they and Bayer Leverkusen can reduce the £18m difference in their valuations of the player. (Telegraph)

Manchester United and Brazil midfielder Andreas Pereira, 24, is a target for Benfica and Valencia. (ESPN)

United have re-ignited their interest in Juventus and Brazil left-back Alex Sandro, 29. (Calciomercato – in Italian)

Leeds have made a third bid – believed to be around £25m – for Brighton’s English defender Ben White, 22. (Sky Sports)

Wolves are willing to listen to big-money offers for Spanish winger Adama Traore despite the 24-year-old having three years left on his contract. (Mail)

Fulham have enquired about the future of Barcelona and Spain centre-back Gerard Pique, 33. (Libero – in Spanish) 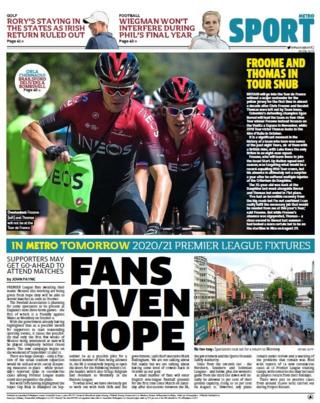 Back page of Metro