Brazil forward Neymar, 29, has made a pre-contract agreement until 2026 with Paris St-Germain – and the French club are now focused on securing a similar deal with France forward Kylian Mbappe, 22. (Telefoot, via AS)

Borussia Dortmund striker Erling Braut Haaland could cost the club who buy him an extra 40m euros (£34m), because his agent Mino Raiola and father Alf-Inge want 20m euros (£17m) each in commission as part of the deal. (RAC1, via Marca)

Haaland has a release clause of 75m euros (£64m) that activates next year but could leave this summer if Dortmund continue to struggle in the Bundesliga and miss out on a Champions League spot. (Sun)

Norway international Haaland, 20, has been linked with Barcelona but manager Ronald Koeman says any decision on a move must be made by club president Joan Laporta. (AS)

Lionel Messi is waiting to see Laporta’s proposal for the future of Barcelona before deciding between whether to stay or leave to join either PSG or Manchester City. (Mundo Deportivo – in Spanish)

Angel di Maria says he would love to play alongside Argentina team-mate Messi at PSG if the 33-year-old striker leaves Barcelona. (beIN Sports, via Goal)

But Moyes believes it it not necessary for West Ham to secure Champions League football next season in order to keep players such as Rice and Soucek. (Sky Sports)

Manchester United and Juventus are the clubs showing most interest in signing Barcelona and France forward Ousmane Dembele, 23, but Liverpool and PSG also remain keen. (Mundo Deportivo – in Spanish)

Spain winger Lucas Vazquez, 29, whose Real Madrid deal finishes at the end of the season, will be offered contracts by Manchester United, Chelsea, AC Milan and Bayern Munich. (ABC – in Spanish)

Juventus are unlikely to pay the extra 10m euros (£8.5m) to Atletico Madrid to extend 28-year-old Spain striker Alvaro Morata’s loan deal by another year because of financial problems. (AS)

Everton and Colombia centre-back Yerry Mina, 26, wants to move to Serie A this summer, with Inter Milan and Fiorentina both keen. (Sun)

Manchester United boss Ole Gunnar Solskjaer says Argentina striker Sergio Aguero, 32, will not be joining from rivals Manchester City when his contract finishes at the end of the season. (Goal)

Arsenal face competition from three Premier League rivals, as well as Paris St-Germain, for the permanent signing of Real Madrid midfielder Martin Odegaard. The 22-year-old Norway international has made 13 appearances for the Gunners since arriving on loan in January. (90min)

Club Bruges have made an offer for Tottenham and Belgium defender Toby Alderweireld, 32. (Voetbal 24, via Sun)

Red Bull Salzburg forward Patson Daka, 22, who scored an eight-minute hat-trick against Stum Graz on Sunday, continues to be followed by clubs including Liverpool, Arsenal, Manchester United and Everton. (Star) 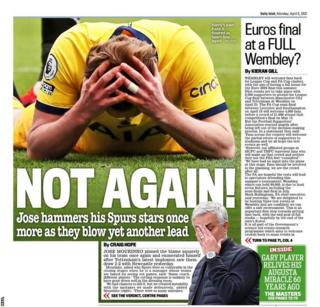 The back page of Monday’s Mail

Covid: Trials to begin for return of England mass events

Johnson: Lockdown exit to be ‘cautious and prudent’

The Labour leader is told he has "failed this country" for not opposing government lockdown policies.Sir Keir Starmer was...